The Solemnity of the Ascension of the Lord, is one of the great solemnities in the Christian liturgical calendar and commemorates the bodily Ascension of Jesus into heaven. Ascension Day is traditionally celebrated on a Thursday, the fortieth day of Easter. However, some Roman Catholic provinces have moved the observance to the following Sunday. The feast is one of the ecumenical feasts ranking with the feasts of the Passion, of Easter, and Pentecost. The observance of this feast is of great antiquity. Although no documentary evidence of it exists prior to the beginning of the 5th century, Saint Augustine says that it is of Apostolic origin, and he speaks of it in a way that shows it was the universal observance of the Church long before his time. Frequent mention of it is made in the writings of Saint John Chrysostom, Saint Gregory of Nyssa, and in the Constitution of the Apostles. The Pilgrimage of Aetheria speaks of the vigil of this feast and of the feast itself, as they were kept in the church built over the grotto in Bethlehem in which Christ was born. O Almighty God, whose blessed Son our Savior Jesus Christ ascended far above all heavens that he might fill all things: Mercifully give us faith to perceive that, according to his promise, he abides with his Church on earth, even to the end of the ages; through Jesus Christ our Lord, Amen.

Sacrament of Reconciliation:
Saturday 3:15 pm – 3:45 pm or by appointment

Exposition and Adoration Of the Blessed Sacrament and Reconciliation every Thursday from  9:00 am- 12:00 pm at Our Mother of Sorrows.

Blast From the Past- Archives 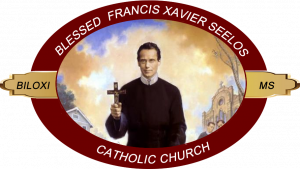